Start a Wiki
Princess Odette is the main protagonist of the Movies: The Swan Princess Series. She's based on the carackter of the Classic ballet Swan Lake.

She is a loving young woman. She is the wife of Prince Derek and a loving carrying mother of Alise her adoptive daugther.

Odette is a tall, thin mature young woman. She has blond wavy hair. Her eyes are voilet or dark blue. She wears a golden heart shaped necklace that it was given by Derek when she was born. She wears often a blue dress. Her age is never reveal. She could be in her early 20s.

In the movie The Swan Princess, Odette was born. Her father King Wiliam a wise king who rules a huge and a mighty Kingdom. At first he was sad because he was grwoing old and had no children to be the next heir to the throne. But when his daugther was born, King Wiliam is overjoyed and his kingdom are happy.  Kings and Queens come from far and near to give the blessing to Odette and along them, was the widow  Ubertra and her son Prince Derek. He gave Odette a beautiful golden necklace in the shape of a heart with a Swan on it. King Wiliam and Queen Uberta have the same idea: when the children meet each summer and falling in love, they can rule two kingdoms. But one didn't agree with that. It was the evil Sorcerer Rothbart.

All what he wanted was to have King Wiliams Kingdom and be King. But before he could do it, the Guardians enters in in his secret laboratory and destoy all his black magic. But instead to sentence him to death, he was only banished. Rothbart, threatens Wiliam, saying that someday he will gain his power back and everthing he owns and everthing he love will be his.

As the time passes Odette and Derek were growing but they disliked one another. They never put the idea of getting maried. Derek later befrends a boy Bromley like his age and become best friends. Still they hate eachother. As they grew up into teenages Derek seems t to be jealous when he sees Odette flitering with one of the gaurds.He began to like her. But Odette didn't show her feelings to him at all. As they reach the adulthood, they began to fall in love to eachother. While dancing at the ballroom, they share their first kiss. Derek wantes to marry her now, but Odette, surprised by the anounce, didn't want to marry him now. Derek says that she's beautiful, and Odette thanks him but she asked him what else, and Derek unintencionally says: What else is there?. With that the wedding was called off.

Odette and her father, rode the next mornig to their home. Queen Uberta is disapionted at her son's behavior, she claims that all  those years of planing were wasted. Lord Rogers a friend of Derek wants to talk about what happen back then. But Derek wasn't sure to get all his feelings to Odette, and finally he wanted to prove his love for her.

On the middle of the road, Odette and her father were attacked by Rothart as he transforms into a monster: The Great Animal. He kills many of the guardians and one of them tried to go to Prince Derek and tells him what happen and he died. Derek notices, that Odette was in danger. But when he arrived at the place, he finds Odette's necklace and King Wiliam lying on the ground. It happen so quickly, King Wiliam last word were: It's not what it seems, and that Odette is gone. Derek is comfused by the words it not what it seems.

Elsewhere Odette is kidnaped by Rorthbart taking her to Swan Lake, where he tranfoms her into a White Swan. When Moon comes up, Odette tranforms into a Princess. Rorthabrt wants to have Odette as his wife and rule her father's kingdom as King and Queen, but Odette refuses to marry him. While at Swan Lake, Odette is free to go whereever she likes to go, but only near  Swan Lake when the Moons sets she is opbligated to tranforms into a swan again. Odette soon befriends 3 animals friends: a french frog,Jean-Bob, who believes he's prince, a puffin bird named Puffin who speaks with an Irish accent, and a turtle called Speed. The 3 together help Odette  to rejoined her with Derek.

Since the day Odette was kidnapped by Rorthart, Derek didn't give up to search for Odette. The Whole kingdom believes that Odette is death but Derek didn't believe them. His Mother wants to find another Princess for his son, but Derek didn't want to have a Princess to replace Odette. He beagn to train very hard with his bow, arrows and and with Lord Rogers and Brombley they start to do: Catch and Fire and ended up well.

One day, Derek and Bromley, are on the way to find the Great Animal so Derek can free Odette, and bring her home. But when Bromely get's lost in the Forest Derek is on his own. When Odette and Puffing are flying over the light blue sky to find Derek, their have to very careful in case of the Hunters. When An Arrow flew up to them, Odette notice that Derek is near. Flying lower to the forest, Derek sees a White Swan. He thinks that is the Great Animal. So he aims his arrow to her and shoots. Puffin comes just in time to avoid her from the arrow.

Derek followed them and Odette and Puffin avoid his arrows. finally they all reached Swan Lake and Odette is frightened of Derek's arrows just then when moon comes up and Odette knew that she has to go to the Lake to chance back into her Princess self. Afraid, Puffin encourgare her to fly to the lake. Odette flies to the lake, but some clouds covered the moon and Derek aims again to Odette. Puffin avoid Derek far enough. FInally The Moon shines again and a Golden Light comes to show. Derek turns back and sees the White Swan chancing into Odette.

Odette and Derek, share a happily reunion together, but their happines isn't long, because Rorthbart is near by. Odette tells Derek that she's under his spell and the only way to send Odette free, is a wow of everlasting love, or else she have to marry Rorthart. Derek remembers the ball that his mother is prepering. He invites Odette to go to the ball where he have to make a wow of everlasting love and also, he must prove it to the world. They didn't know that Rorthart is listening and before Derek leaves Swan Lake he returns Odette's Locket.

Rorthbart appears, and Odette has to pretend that there no one, but herself. And Odette has to say that she finally accepts Rorthabrt. But he does not believe it or treat him like a fool, Rorthbart shows Odette Derek's bow and he  throws it to the lake. Odette is very angry at him and also she claims that she'll be never his. She will marry Derek. But Rorthbart takes her locket and he proclaims, that tomorrow night, there is no moon and he disappears with an evil laughter.

Inside his castle, Rorthart has to plan how finish Derek. His hag, is the one to help him out,he plans if a fake Odette goes to the ball instead of the real Odette, and when Derek makes The Wow of everlasting love to the wrong girl, than the real Odette, will die. Again as a Swan, Odette, is locked in a waterdungeon Bromely who was lost in the woods, joins Odette, but he doesn't know that it's Odette.

Back at the castle, Derek is waiting for Odette but she isn't coming.He begins to get worried. The Ball has already began. But suddenly there is a huge knock at the door. Chamberlain, opens the door, and Odette apears (The fake Odette) Derek took the wrong girl by the hands and they start to dance.  Meanwhile Puffin, Jean-Bob and Speed are trying to help Odette to get her out by avoiding 3 aligators.

Finally, Odette is free, flies as faster as she can, but she arrvied late, the wrong girl is already there. And Derek is making the wow of everlasting love to the wrong Odette. Odette tried desperately to find a way in but all is closed up. Odette feels there's no hope for her that Derek sees her.Rorthabrt appears and he turns the face of the wrong girl into his hag. Derek realizes his mistake, and finaly he sees a White Swan flying away. Derek rides on his horse, to follow Odette. Odette is growing weaker,and when she arried at Swan Lake she isn't able, to get into the lake. She tuches the lake with her wings, and she collpases on the ground.

Derek arrieved  at Swan Lake, but he is shocked as he sees Odette lying on the ground. He rushes to her taking her in his arms. Odette feels that Derek is near by her side. She is to weak to hold much longer. Derek tried not to allow Odette  to finish her thoughts. Derek repends his mistake, but that doesn't help Odette. She smiles weakly up at him and reaching with her hand his cheek she says she loves him and dies in his arms.

Derek refuse to accept that Odette is gone, and furious, he yells, to Rorthbart, that the Wow he mad was for her. Rorthart appears. Then a huge fight is about to start. Derek fight agaist Rorthart who chance himself into the Great Animal. Rorthart is to strong for Derek. But still there's hope. Odette's friends, remember Derek's bow. Puffing grabs Jean-Bob and throws him at the bottom of the lake to get the bow.

Derek is lying at the ground when Jean-Bob give him his arrow. A new energy comes to Derek, but he had forgotten his arrows. A familiar voice comes out:It's Bromely who finally is out of the dungeon and he sends his pal an arrow, just like Catch and Fire. Derek takes the arrow and aims at Rorthbart heart. As Rorthabrt impacts the surface from Swan Lake there is huge explosion. He is death, for good. The trio are glad that the evil Sorcerer is death,but they remaid silence again. Odette isn't alive yet. Derek very sadly takes Odette in his arms again, and confesses his love fo,r her for her kindness and kindess and he loves her. He kisses her forhead and huges her agaist his broken heart.

But suddenly, Odette comes back to life: The Spell is broken. Derek and Odette are together again. Soon they married and both a living at Swan Lake with they friends as the Future King and Queen. And They lived happily ever after. 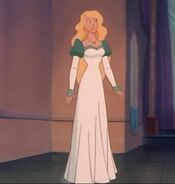 Odette and Derek happy married.
Add a photo to this gallery
Retrieved from "https://campbell-morton.fandom.com/wiki/Princess_Odette?oldid=409"
Community content is available under CC-BY-SA unless otherwise noted.